That's Jeff on the left doing what he did so well, stirring and thickening the broth in an ensemble setting. Jeff died suddenly in December of 2006. We have reconvened nHarmonic Brass (an ensemble outgrowth of the Sound Vision Orchestra) a brass choir that Jeff and I developed and co-led in 2004-05.
nharmonic Brass is Joseph Daley/tuba & music director; Stephen Haynes, Nate Wooley, Stanton Davis/trumpets; Bob Hovey, Art Baron, Aaron Johnson/trombones; Warren Smith/drums and percussion. We will perform two compositions by Jeff written expressly for the group: X Chromophono Y and Confluence, Duplicity and Triple Trickery.

Organization of the concert is being spearheaded by Mark Hennen and is being presented by the Sound Vision Orchestra and Roulette. Mark will perform, as will others, and we will all reflect on the memory and living spirit of our dear friend, Jeff Hoyer.

Posted by Stephen Haynes at 8:02 AM 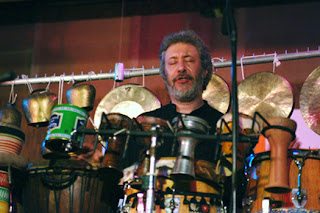 The New York version of Adam's Go: Organic Orchestra returns to our home and sonic laboratory, Roulette, for a third series of performances. While we always have a core group of players present, each evening will have some variation in instrumentation. Last time out Amir ElSaffar joined the trumpet section.

The audience is becoming more and more of a who's-who environment as the word gets out on the evolving ensemble work. Reservations are encouraged as space is limited, and fills up quickly. A tip of the hat to Jim Staley for keeping the fire burning and a lamp on in the window of this wonderful artist run/centered space in a city that can seem cold at times as regards support of creative music.

Posted by Stephen Haynes at 7:41 AM