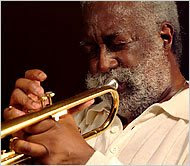 First, a thoughtful and nuanced assessment of the new 17 Musicians in Search of a Sound: Darfur by Marc Medwin from the Summer 2008 issue of Signal to Noise.

This release, recorded at last year’s Vision Festival, is the first publicly available document of Bill Dixon’s orchestral work in forty years. The landmark Intents and Purposes, released on RCA/Victor in 1967, remains inexplicably and unjustly out of print. Consequently, Darfur is the only example of his orchestral music in the CD era, aside from his recent collaboration with Rob Mazurek’s Exploding Star Orchestra on Thrill Jockey.

I attended the performance as well as a rehearsal, where I watched the music taking shape under Dixon’s incisive guidance. The 16-piece orchestra assembled for the occasion featured a stellar line-up that emphasized wind instruments (participants included Karen Borca, Taylor Ho Bynum, Andrew Raffo Dewar and Steve Swell); throughout they played with unflagging energy and understanding of Dixon’s idiom.

What separates the live and recorded experience is the sheer volume of detail obtainable from repeated listening. One of my most vivid memories of the concert involves the all-encompassing chord that is now aptly called “Intrados” (the inner curve of an archway). In both rehearsal and performance, it swelled to fill the whole room, threatening to overflow into the street below and hush it with its unnerving beauty. On the disc, the chord is revealed to be a series of undulating sustains; Michel Côté’s contrabass clarinet is one of the first instruments to swim into focus, but repeated listening demonstrates a series of interconnected but fluid masses of sound. Jackson Krall’s cymbals shimmer and roar as Warren Smith’s vibes trill, providing a transparent backdrop over which the wind instruments slowly dance.

“Intrados” turns out to be a microcosm of the whole hour-long structure of arching crescendos and decrescendos where the orchestra swells and fades as a single body; at times the music even suggests the interwoven cycles of Pierre Boulez’s Le marteau sans maître.

“Countour II” is half an arch, an astounding upward sweep ending on a plateau of unisons and trills, with Dixon’s “Hit it!” indicating the high energy level in the performance spacet; the astonishing further elongation in the 23-minute “Sinopia.” The arch is, however, not the only structural device at play; disjunct, highly chromatic unison passages recur throughout the work, notably during “In Search of a Sound” and “Darfur.” The latter is a menacing study in semitones, stark thirds and rapid-fire interjections, shot through with the tympani’s repeated rhythmic pattern. The unison passages never repeat exactly, adding another evolving layer to Dixon’s multivalent structure. That structure deserves careful analysis beyond the limits of a CD review.

If the chaos of the “Darfur” section invokes that region’s current state, do the series or “Pentimenti” imply an uncertain outcome to the conflict? In any case, Dixon has fashioned a work around which new formal paradigms will need to be constructed. Dixon’s music explodes category: it is neither free nor through-composed, though elements of both approaches are often discernable. If Darfur eclipses Intents and Purposes in scope, it is because Dixon has made huge compositional advances that are still little known to the general public. I hope that this fine addition to his discography, coupled with a renewed interest in his work, will allow more of Dixon’s orchestra compositions to be performed by equally sympathetic interpreters.

The July 2008 issue of WIRE contains a feature article on Bill, The Great Learning, written by Phil Freeman and accompanied by wonderful photographs of Bill at home and in his studio produced by Mark Mahaney. Bill's conversation with Phil is also available online-highly recommended!

Image of the Bill Dixon by Nan Melville
Posted by Stephen Haynes at 9:42 AM