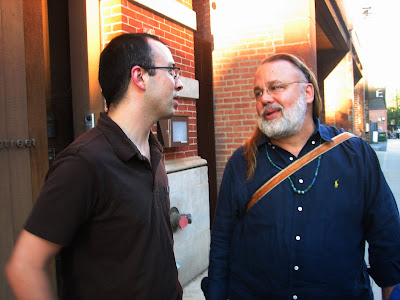 Throughout the history of improvised music and jazz, two-trumpet sessions have never been as popular as duets between saxophonists. Oh there were dates featuring Art Framer and Donald Byrd in the 1950s, for example, and Roy Hargrove and Marlon Jordan in the 1980s, plus a whole collection of Norman Granz-instigated blowing sessions in between. But it seems as if the preferred locus for dual improvising is a commingling of many saxophone keys rather than sets of three valves.

Twenty-first century musicians don’t seem to be limited by these conventions and both of these notable CDs centre on the sounds produced by two trumpets – or a cornet in Taylor Ho Bynum’s case. Each session also includes guitar. Yet the disparity between the discs isn’t that the two brass players – Stephen Haynes is the other besides Bynum – on The Double Trio, are spelled by two guitarists and two drummers, while guitarist Sharif Sehnaoui alone provides the additional sounds besides those exhaled by trumpeters Mazen Kerbaj and Birgit Ulher on 3:1.

Rather the reason for the marked divergence in conception and creation between the CDs is that The Double Trio takes its impetus from Free Jazz, while 3:1 is in the Free Music tradition. Furthermore while the players on The Double Trio – note the echo of Ornette Coleman’s double quartet here – are for the most part playing tune-oriented music in its broadest sense, Kerbaj, Ulher and Sehnaoui are manipulating sounds.

Bynum’s seconds are guitarist Mary Halvorson and drummer Thomas Fujiwara, both of whom have worked with him in other situations, including his stand-alone trio. Meanwhile Haynes, a Connecticut-based arts advocate and educator, who has worked with everyone from Bill Dixon to the Dells, is backed by seldom-heard guitarist Alan Jaffe and veteran percussionist Warren Smith.

Not that the interactive polyphony splits into trio verses trio. For instance on “mm (pf)”, the second part of “Suite Miscellaneous”, both trumpeters squeeze lip-burbling Bronx cheers from their horn as the drums rattle and the dual guitars strum and pick. Progressing in a tempo close to a drunken stagger, the horns parry interjections from the guitars that turn to descending licks while the drummers beat paradiddles and flams. Eventually the brass timbres divide, with one smoothly tattooing the melody and the other ejecting skyscraper-high notes. As the piece turns to diminuendo percussion rebounds, off-centre guitar frailing meld with downward slithering trumpet lines.

In contrast, Bynum’s “YX 6C” comes complete with a rhythmically sophisticated melody, chorded in African High-Life fashion by Halvorson. As the drums roll and rebound, the cornetist’s brassy blasts shape this serpentine construction chromatically, as it’s further decorated by Haynes’ slide-whistle-like discord. While the guitarists conclude by crunching splayed runs together, one plectrumist recaps the initial theme as one drummer continues outputting ruffs.

Even more traditional – in this Free Jazz context – is the six’s treatment of Coleman’s “Broken Shadows”. When one drummer press rolls, the other splashes cymbals, as the guitarists expose a sonic rainbow of finger picking, crossing and re-crossing one another’s lines until the sprightly melody is heard again. Then as the brass players contrapuntally spin out the theme, one guitarist sounds a distorted counter-theme. On other places on the CD, wood-block smacks are heard and one of the brass men –Haynes? – outputs a series of Miles Davis-like smears and slurs on top of booming strumming from the dual guitars.

There’s nothing that overt on 3:1, concerned as it is with textures and tones rather than linear improvisation. With no hierarchical division between the front and backline, each instrument has the same prominence, with Sehnaoui’s playing as obtuse and opaque as the trumpeters’. His looping asides and pedal point string sweeps do however provide a fundamental base on which the tongue slaps, mouthpiece oscillations and spit blows that characterize much of the brass exposition can rest. Discerning Ulher’s singular contributions from Kazen’s is nearly impossible, except for passages on “0:0” where the falsetto yelps are probably from her horn and the basso slurs from his.

Most of the session is concerned with shaping dissonance into movement, with both trumpeters auditioning the results of such extended technique as air-blowing without moving the valves, buzzing the mouthpiece against a solid object, playing quick bursts of concentrated triplets and spluttering and humming through the horn’s lead tube. For his part, the guitarist slides and scrapes along the strings below the bridge and pops the strings head on with mallet-like blows. Piezo pickups may be in use, but if they’re not, somehow Sehnaoui still manages to create oscillating buzzes equivalent to the trumpeters’ droning resonation.

Essentially spherical in construction, the six-track CD is defiant in its staccato dissonance, with no crescendos or diminuendos. Instead chiming friction, yawning echoes, thick, metallic-sounding rotations and jack-hammer like patterns are followed. Tremolo tonguing and a series of onomatopoeic and animal-like tones encompassing dog yelps, feline purrs and woodpecker patterns are more prominent than traditional brass notes.

Considering these sessions plumb the limits of trumpet expression in improvisation without remotely resembling one another, both confirm the versatility of a brass instrument duo.

Visit Ken and Jazzword if you have not already!

Image of Taylor and Stephen at Firehouse 12 by Jeff Burns
Posted by Stephen Haynes at 1:03 PM No comments: 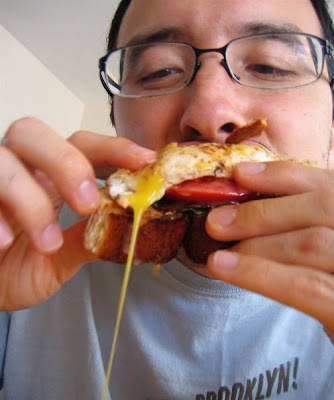 Firehouse 12/New Haven
If you are wondering why Taylor is stuffing his face, there is a very simple explanation that I would be happy to share with you: he has been busy, busy, busy! While his recent activity as a sideman and a leader is too abundant to list here, that fact that Taylor still has not unpacked after moving back to New England several months ago gives you an idea of what I am talking about.

Last night, my wife Brigid and I drove down to New Haven and caught the first set of music from Spider Monkey Strings at Firehouse 12. The venue is so ideal for deep listening: a small room, acoustically designed (and used) for recording that holds no more than 75 audience members. The occasion was a local premier of new work, Madeline Dreams, based on a novel written by Taylor's sister, Sarah Shun-lien Bynum, entitled Madeline is Sleeping.

The music was a delight, a integrated blending of Taylor's influences and current stance in the music. Lyrical through-composed passages seamlessly flowed into guided improvisation, moving with a delightfully complex but clear polyphony. He really has understood Ellington's mandate around selection of instrumentalists and deployment of individual voice as a means of orchestration.

The big surprise for me was hearing the newest member of the ensemble, Kyoko Kitamura. Her role in the new work was operatic but her delivery, tone and timbre were coming from a different source: clear tone, limited usage of vibrato, seemingly-perfect pitch (this without the traditional use of guide tones!), wide range and clear enunciation of the text. What sealed the deal for me was when the band kicked into a twenties Ellington composition. Kyoko played Ivy Anderson to Taylor's Bubber Miley and brought the house down!

Today, Taylor and his crew spent the day recording this music for release on Firehouse 12 Records. Tomorrow they will be in Boston at the Boston Center for the Arts.

Taylor and his colleagues exhibited a truly modern conception, and were all non-genre-impaired. It doesn't get any better than this!

Image of Taylor at home by Rachel Bernsen, his wonderful wife.
Posted by Stephen Haynes at 8:19 PM No comments: