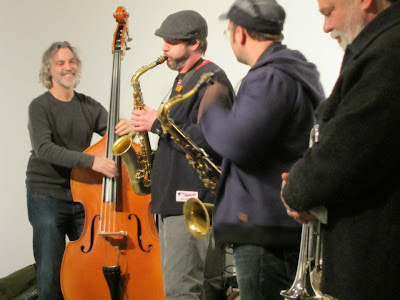 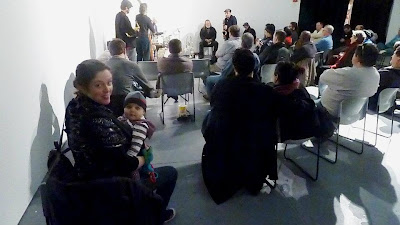 Several weeks ago, five improvisers  came together on a chilly Sunday afternoon to make some music together.  We ended up working in a large gallery space at Real Art Ways that was open between shows. Joe invited his Wildlife quartet - Petr Cancura, Jim Hobbs and Luther Gray - to join us.  We had a wonderful audience, as we always do these days.  Petr's wife and daughter where there, and I'd often see them dancing to the music when I looked up to see what was happening in the audience. 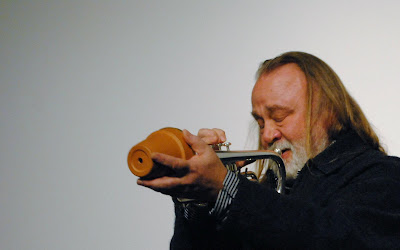 Images of Improvisations V by Lyn Horton and Rob Miller
Posted by Stephen Haynes at 8:15 PM No comments: 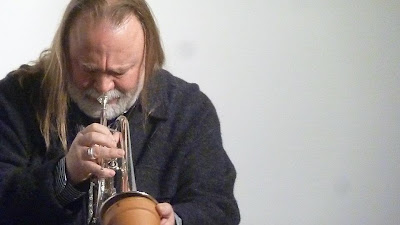 A Conversation on Improvisation
Where We Live/WNPR
Hartford, CT

I was recently invited to join John Dankosky on his radio show, Where We Live, to discuss the notion of Improvisation.  The invitation was a response to the Improvisations series that I curate with Joe Morris at Real Art Ways.  When I spoke with the producers of the show, I suggested that we avoid the obvious and not fill the studio with musicians.  Instead, we invited an improvising choreographer - Rachel Bernsen - an improvising actor and a chef.

We had a delightful time together, and it quickly became clear that more time was needed for the conversation, and that several topics raised during the course of our talk should have their own show.  This was the first time that I have been on air at WNPR since I moved to Hartford twenty years ago.  I hope to return to the studio soon to continue/extend the dance.

Listen to the podcast of our conversation here. 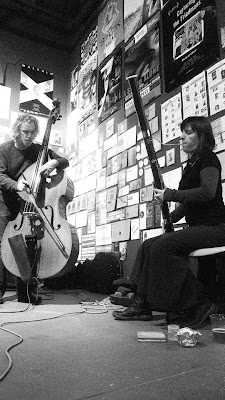 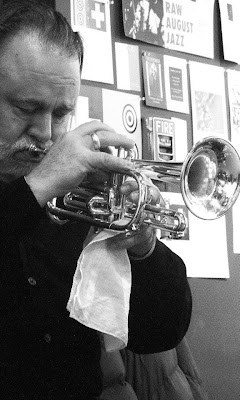 At times it is hard to believe the way that each new event in our series seems to get better.  The work together at Real Art Ways has proved to be such an unfolding, such a gift.

So it was last month when Joe Morris and I gathered together with Sara Schonbeck and Michael Evans.  I had played once, years ago, at Firehouse 12 with Michael, in an ensemble of Joe's.  Sara and I sit together in Adam Rudolph's Go: Organic Orchestra.  This was the first time we had worked together in this configuration, and the first time for me hearing Sara really stretch out.  And stretch out she did!  We so rarely get to hear the bassoon in an improvising context, playing in the same manner and with the same authority that one expects from the saxophone.  Sara wove long, hard-swinging lines and played with deep lyricism across the full range of her instrument.

And then there was Micheal.  The best way for me to describe what he brought would be to say that he proved to be an authentic trickster, a shaman of sound.  Our improvisation took on a real air of ritual as the evening progressed. At a point, Micheal moved away from the drum kit and began to dance, striking a long rope laden with small cymbals.  The spirits most surely were in the room! 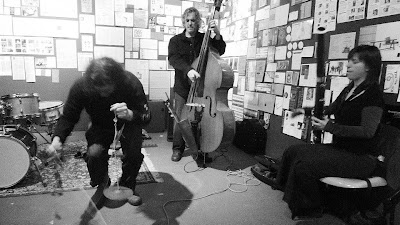 Images of Improvisations IV by Maurice Robertson
Posted by Stephen Haynes at 12:17 AM No comments:

The Influence of Bill Dixon 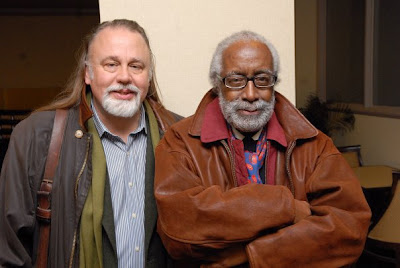 I wrote this essay in 2009 for the liner notes for Bill Dixon's Tapestries for Small Orchestra.  I have decided to share this work here for those who have not had the opportunity to listen to/read from the recording project.

The Influence of Bill Dixon

I first met Bill Dixon during the fall of 1973.  I was eighteen, studying at Rhode Island School of Design, and walked into his studio at Bennington College during a short visit to the campus. I spent the better part of an afternoon listening to him talk, work and teach. Bill was developing a series of solo trumpet language/pieces, many of which are now documented on the Odyssey box set. He had a Revox reel-to-reel tape deck and two microphones set up by the studio window. From time to time, Bill would approach the recorder, wind back what he had been working on, listen to a bit of it and then continue the ongoing narrative. I had never seen anything like this before, not to mention the singular sensation of Bill’s sound and the charismatic, enveloping quality of his persona.

Three years later, after multiple visits to Vermont, I moved north and began an intense and formative period of deep study with Bill that lasted six years. In fact, though our relationship is far more layered now than it was thirty years ago, the mentorship continues. This spring, I asked him to give me lessons in composition, inspired by witnessing his own voracious appetite for new knowledge (he recently spent a weekend in New York attending a seminar in scoring music for film).

Those of us who pay attention to Bill’s work, and to what is said about it, have seen frequent commentary during the past decade citing Bill’s primary influence upon a new generation of trumpet players. He is arguably the next evolutionary step in the growth and technical development of the instrument, following Dizzy Gillespie’s ground-breaking work in the 1940s and ‘50s. Go back and listen to Bill’s articulation and technique, evident as early as the mid-sixties on recordings, and then listen to Dixon in full flower during the seventies and eighties. Dig the sonic singularity expressed in Odyssey, an almost Olympic meditation (or method book?) on the potential inherent in the solo trumpet; or the visceral linear liquidity captured in November 1981.  His limning of the unexplored areas of the trumpet through consistent, controlled usage of multiphonics and extended range alone earns Bill the mantle of trumpet innovator.

This continued spirit of sonic exploration is evidenced by Dixon’s current thrust on the trumpet: his mapping and harnessing of the lower, ‘off the horn,’ pedal register (who else exhibits such controlled articulation there?); his use of electronics, delay and reverberation, as well as his employment of extreme modality of attack and articulation - sounds that carry the quality of spiritual possession in their delivery, evocative of speaking in tongues. It is worth noting that all of this new work is framed within/arises from the context/effect of age/longevity on physicality coupled with stored experience, sustained study and daily experimentation. Just as one hears a timbral shift in the late work of singers (the past ten years of Abby Lincoln’s work) or wind players (compare/contrast Ben Webster as ‘rabbit’ with twenties Ellington to his ballad work with Art Tatum at the Patio Lounge in 1956: air as tone/note) that simultaneously evidences un-invited/welcome limitation while opening a doorway to new musical pathways, Dixon’s currently decreased employment of upper register multiphonics reflects organic change and the artist’s use of what is available to create new work.

Compositional Chronotopes Meet Pragmatism in Practice
“Notation, in this music, especially if you are a leader, can be the way you enter the room; even how you take your horn out the case.”
“You use what works; what doesn’t work you discard.”
-Bill Dixon

Dixon’s work as an instrumentalist and composer is informed and infused by an extended view of narrative - both the sense of the long line (extensions of playing ‘across the bar lines’) and in the broader arena of orchestration and arrangement. Listen closely to the work in this new recording and you will hear melodies that move by so slowly that they begin to transmute from the horizontal into the vertical. Again, it is worth referencing the seasoning effect of age, as if comparing a ballad delivered by a twenty year old to a version spun by a veteran artist. We are not simply talking about a minimalist approach, but one that profoundly embraces and inhabits the notion that less is indeed more: a single note as a symphony. Few practitioners (even amongst the ‘influenced generation’) have understood and/or evidenced this core aspect of Dixon’s music: his singular sense of time (as an individual voice and in the ensemble context) and his way of organizing the music (composition).

The landmark mid-sixties recording Intents and Purposes was primarily a through-composed/scored piece of music. “At the time,” Dixon remarks, “this was the only way to be sure to get what I wanted.”  Just recently, Bill told me that if he knew then what he knows now he would have written a lot less. During the summer of 2007, in preparation for the work that became 17 Musicians in Search of a Sound: Darfur, Dixon produced over one hundred pages of material for the orchestra. As the dates of the rehearsal approached, he was faced with striking a delicate balance between the amount of calligraphic notation he had created and the modest amount of rehearsal time available. Bill did what he has done with increasing frequency in similar situations: he reduced the quantity of written material and concentrated, during rehearsal, on direct composition/ communication of intent. Not for nothing, Dixon’s choice of musicians for the project flowed directly from the Ellingtonian modality of orchestration: all players he knew and trusted, with some relationships stretching back over thirty years. He taught the ensemble specific language and indicated possible ways of moving through material, ultimately crafting a piece that is as revolutionary a statement for its day as Intents and Purposes was forty years earlier.

Coming full circle to the development of the music at Firehouse 12 last summer, Dixon brought these principles to a more intimate setting, carefully creating an intentional environment that drew this smaller orchestra into his very particular sensibility. This is not a soloist’s music: there is no emphasis on the individual as being separate or distinct from the sonic whole. Indeed a Tapestry, the listener will discover a weaving of the individual as orchestra into a suite for multiple improvising orchestras. It is a layered creative world made up of nine carefully chosen musicians, offering a new window into the wonderful vision of one uniquely American artist: Bill Dixon.

Posted by Stephen Haynes at 10:04 AM No comments: