The Next Project: A Bill Dixon Update 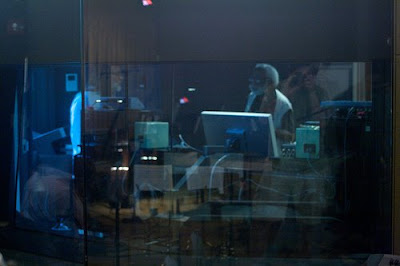 As we continue the process of preparing the recordings and film of our recent residency at Firehouse 12, we have begun working on a new project that combines aspects of archival activity with Bill’s recent direct connections with a range of players whose work bears the stamp of his influence.

Bill has drawn up a short list of his solo pieces (see Odyssey) that will be transcribed and published as a folio of music for study and performance. The accompanying CD recording will feature a raft of trumpet/cornet players, each performing and/or interpreting (too soon to tell) a solo composition originally created by Bill.

A simple, elegant concept that opens the door to a range of questions regarding combined systems of notation, as Bill’s technique moves on and off the instrument as regards tempered tuning, and employs a range of extended technique including non-vocally generated multiphonics and controlled usage of pedal tones. This then begs the development of performance notes to accompany any prepared notation of the work.

How much of Bill’s technique can/should be replicated? Are there alternate methods (this would seem likely given the field) one might use to (re)create Bill’s sound and way of moving? What is the relationship between the technical and the aesthetic in Bill’s solo language and how can the apprehension of this relationship inform the creation of new work by future improvisers? These are some questions (there are more, believe me!) that come to mind.

Stay tuned for details as the work unfolds. Images of Bill at work by Nick Cretens
Posted by Stephen Haynes at 7:49 AM No comments:

Forbes Graham, Peter Evans and Me 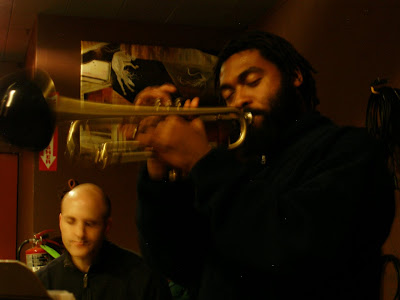 The Music Workshop
Hyde Park, MA
September 25, 2008
Young Forbes Graham has asked me to participate in his ongoing performance series, The Music Workshop. Wunderkind Peter Evans will also perform. Too soon to say what the combination of players will be, but I have always had a fondness for grouped trumpets.

Not for nothing, Peter and Forbes are two of a growing phalanx of players (Rob Mazurek, Nate Wooley, Taylor Ho Bynum, Franz Hautzinger) whose work is strongly indebted to that of my friend, colleague and mentor, Bill Dixon.

With Bill approaching his 84th birthday in October, this begins to feel like an early opportunity to create a sonic birthday card. More on that notion later, I promise. 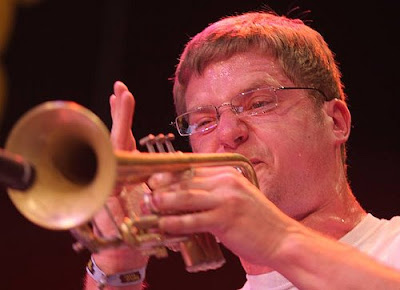 Posted by Stephen Haynes at 2:07 PM No comments: 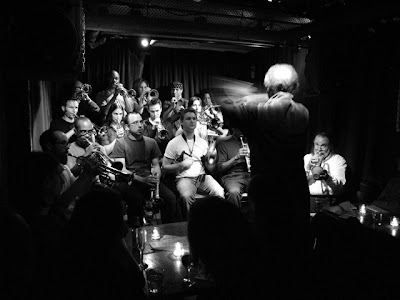 BRIC Studios
Brooklyn, NY
September 23, 2008
The Festival of New Trumpet Music is upon us! FONT (Dave Douglas and Taylor Ho Bynum) has always been kind to me, providing early performance opportunities for my string ensemble, SALT; and my quartet, Bugaboo, as well as opening the door of opportunity that led to a recording and release of The Double Trio in concert at the Jazz Standard.

The last time that I joined Butch Morris for this semi-annual trumpet conduction, we squeezed about twenty trumpet/cornet players onto the stage at the Cornelia Street Café. We should have more room this time, and the music continues to grow every year.

Not for nothing, the evening always serves as a bit of a family reunion. I see folks that I rarely connect with but have known for years and get the opportunity to meet new players. 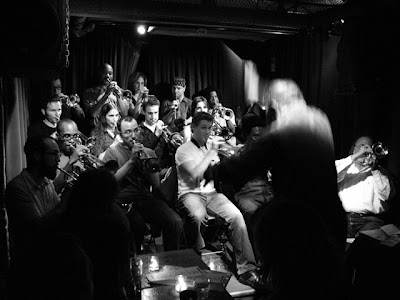 Images of Butch Morris & Trumpet Nation at the Cornelia Street Café by Scott Friedlander
Posted by Stephen Haynes at 12:27 PM No comments: