Jazz in the Space Age 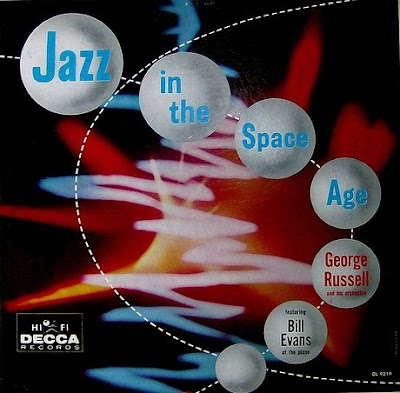 Years ago, I had a lesson with Roswell Rudd. At that lesson, he told me he had decided that he should not teach his individual solutions to improvisation to others, that I should find my own way. His advice was, "if I were your age, I would go find George Russell and follow him around."

Several years later, I met Mr. Russell at Bennington College, where I studied and later taught. Bill Dixon had invited him up. Bill and George used to live in the same building on Bank Street in New York city. Bill was George's copyist at the time. "There where two sets of cats who came to our building to study. One set went upstairs to study with George. The other set came to study with me."

When I moved to the city in 1982, I spent the summer watching rehearsals of the George Russell Living Time Orchestra. They took place at Henry Threadgill's AIR studio. The trumpet section was Ron Tooley, Stanton Davis and Tom Harrell. After awhile, I began to sub for Stanton, who I had also met at Bennington.

When the orchestra returned from it's European tour, Stanton asked me to sub again, this time at the Village Vanguard. Stanton was in the pit for Black and Blue on Broadway at the time. During that week I assisted by training two other subs, Ray Anderson and Brian Lynch, running them through the parts in George's hotel room.

George was a singular musician; innovative and, I think it is fair to say, underappreciated. And George was, shall we say, a complex human being. 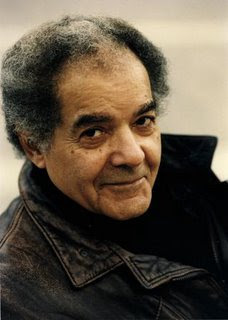 Posted by Stephen Haynes at 3:24 PM No comments:

Sitting In With Burnt Sugar 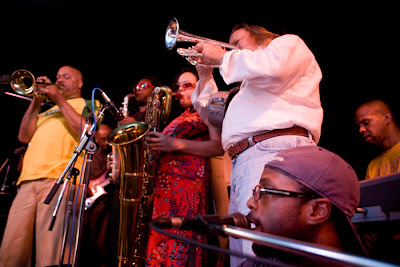 Following the topic of having fun close to home, I recently had the opportunity to sit in with Burnt Sugar at , thanks to a generous invitation from Greg Tate, who leads the ensemble.

Greg employs Butch Morris’ Conduction methodology, but manages to put his own distinctive spin on the technique. Most notable is Greg’s passion (obsession) for/with rhythm. He often builds from the ground up, employing bass and drum grooves as the foundation for his musical house. Greg is also more open-handed (minimalist) in his direction of the music. This may, in part, be due to the family model he employs with Burnt Sugar. This is a working band (that may contract or expand in size) with a solid center of well-trained players: a rarity these days.

Rather than pull me up at a moments notice to solo, Mr. Tate allowed me to stand in the section for the entire evening. What I dug most was finally getting to play alongside Lewis Barnes, a gentleman and trumpet stalwart for many of William Parkers groups.

The house at RAW was packed, as is usual on Creative Cocktail evenings, and I/we had a ball! 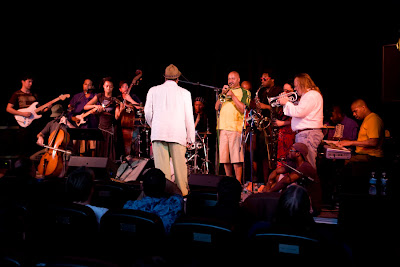 Posted by Stephen Haynes at 3:05 PM No comments: 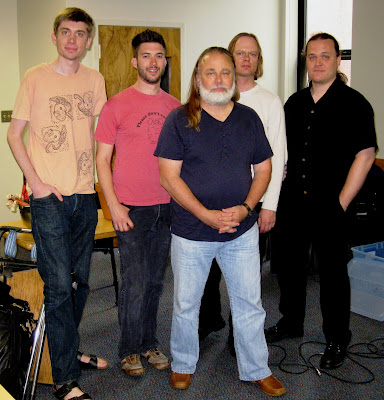 This past Wednesday, my duo partner Todd Merrell and I spent an afternoon with Matt Sargent, Lief Ellis and Bill Solomon, otherwise known as the Hartford Sound Alliance. Three laptops, keyboard, a table of percussion, microphones and my cornet. Matt sampled my output, Lief did the same with Bill. Todd did his own wonderful dance.

What a delight! The music was anything but tentative, and the connection between the five of us was immediate and powerful. A special synchronicity. We meet again next week, and have agreed to visit Outpost 186 in Cambridge, Massachusetts for a small concert in October. What we need is several more opportunities to perform locally and in New York city. Stay tuned as the work unfolds.

Worth noting was the presence of the delightful Nat Reeves, bassist and faculty member at Hartt's Jackie McLean Institute of Jazz. Nat grabbed me for a quick visit to his studio, sharing his excitement about recent developments at the school.

Photo by Nat Reeves
Posted by Stephen Haynes at 11:50 PM No comments: