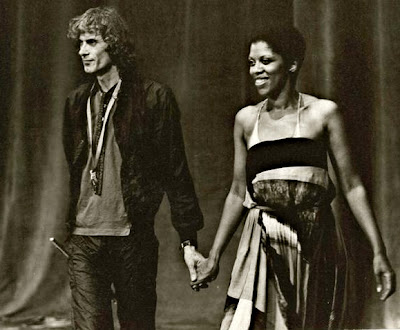 This is the second in a series of posts that will look back at a number of important periods/events in my development as an artist.  To read the first installment in the series, look here.

During the summer of 1982, I moved from North Bennington, Vermont to Manhattan.  A few years later, I was working as a majordomo, managing the Park Avenue household of Norman and Francis Lear.  I wore three-piece suits during the day and did music at night and during the times when the Lears were not at home.  I lived in a small room behind the kitchen and paid no rent.

I learned of a concert of Gunter Hampel's music at Columbia University.  I headed uptown with my horns in a taxi.  Jeanne Lee was in the ensemble, and I wanted to reconnect with her.  Bill Dixon had brought Jeanne to Bennington College while I was there, during the late '70s.  I first met Jeanne, nursing her newborn child, in David Ware's apartment at 501 Canal Street in New York during the fall of 1974.  But that's another story. 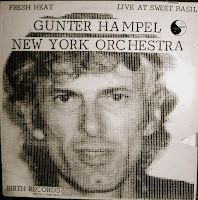 When I arrived at Columbia University, Gunter was conducting a rehearsal.  The band included Marion Brown and Leo Smith.  Leo had not arrived yet.  On a break I spoke with Jeanne and told her I would be happy to cover the trumpet seat for Gunter until Leo arrived.  Jeanne introduced me to Gunter and I got to work.  I ended up staying on stage for the rest of the evening, playing the concert alongside Leo.  I'll never forget that evening, and Gunter changed the band book to include two trumpets going ahead.

Some time later, I heard from Gunter that he wanted to start a New York - based orchestra.  He asked if I would I be interested in working with him on the project. That began a fruitful relationship that lasted a few years, during which I played in the ensemble, handled much of the contracting and, occasionally, helped pay the band (no rent - remember?).  For the rhythm section, I brought in a range of folks: Marvin 'Smitty' Smith and Thurman Barker and Billy Hart; Bill Frisell, Jerome Harris and Allan Jaffe; Bob Stewart.  Curtis Fowlkes, Perry Robinson, Mark Whitecage were some of our steady members.  Trumpeter Barbara Donald spent a memorable run with us at a small theater.  Subs included Stanton Davis, Dick Griffin, Joseph Daley, Warren Smith and a young Don Byron (suggested by Perry in glowing terms that cannot be repeated here).  Up front singing were, always, Jeanne Lee and Art Jenkins, who you may know through his association with Sun Ra.

During the early nineties, I invited Jeanne to join my first quintet.  She agreed and, as she always did, gave generously of her time, teaching me gently along the way.  The band included David Tronzo, Brad Jones and Warren Smith.  Somewhere there is a recording of this work.  I talked alot with Jeanne about her music, her family, especially her mother and her ideas about teaching.  At the time, I was teaching in Brooklyn at PS 399 and at Harlem School for the Arts.

I miss Jeanne Lee, her warm and generous spirit, her work.  For me, she set the standard for living a compassionate life as an artist.  The image below is how Jeanne looked when we last worked together.  Those eyes and that wonderful smile! 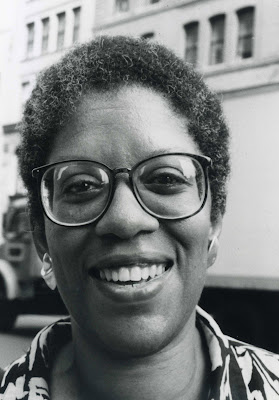 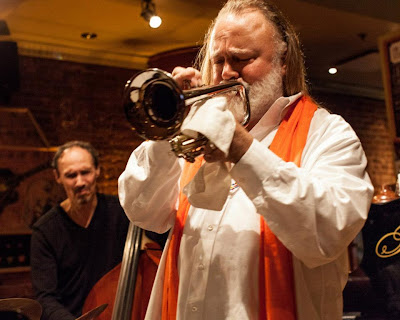 This past October, I was invited to return to Québec to perform in the 2012 Festival de Jazz de Québec.  My friends Michel and Isabelle Côté laid a path of hospitality and love for me and my stay in Québec City was a real delight.  Isabelle hosted many late night gatherings, replete with gourmet cheese plates and bowls of Italian olives.  The conversations with fellow musicians were far-ranging and animated, fueled by wonderful French red wine.

We encamped at Largo, a wonderful club in the Old City.  This was the second time last year that I made music with Michel and the wonderful Maïkotron Unit.  The audience was welcoming and attentive, and I made some new friends that night.  The music was full of fire and nuance, and I hope we have the opportunity to share some of it with you.

Sojourns like this remind me about what matters most in music - friendship and relationships - and how very fortunate I am to be alive. 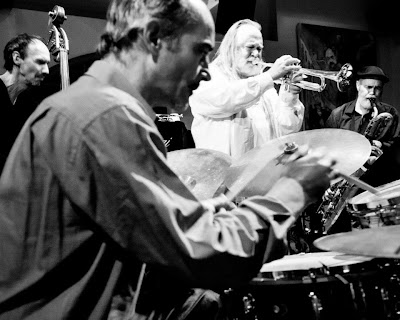 Joe Morris Curates at The Stone 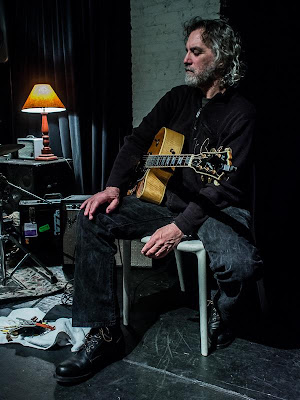 Joe Morris has gathered together a wonderful assortment of musicians, lovingly scattered across a two-week run at The Stone.  The range of the music is a testament to the community that Joe gathers and knits through his work.  I am happy to say that I will participate in two of these evenings.  More about that shortly.

The schedule is too long and well-populated to include here.  See the listings at The Stone's website for details.  There will be two sets every night, at 8:00 PM and 10:00 PM.  All proceeds go directly to the performers.

Image of Joe Morris at The Stone by Peter Gannushkin
Posted by Stephen Haynes at 6:59 PM No comments: