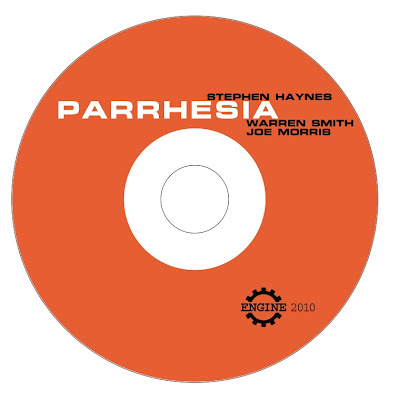 Parrhesia
Engine Records
Joe Morris/electric guitar
Stephen Haynes/trumpet, cornet & flugelhorn
Warren Smith/drums, percussion, marimba & voice
Last spring, Steve Walcott called to ask if I would consider recording with his singular young record label, Engine Records.  I had met Steve when Taylor Ho Bynum and I recorded our Double Trio in concert at the Festival for New Trumpet Music during the fall of 2006.  I had been following the label since I first heard the recordings that Warren Smith made with tenor saxophonist Andrew Lamb on the label.  Walcott just recently recorded and released Warren Smith's orchestra (Old News, Borrowed Blues).

Steve and I discussed a number of projects that I had been working on, or wanted to spark, settling on Parrhesia.  The trio began in 2005 during my year-long residency at Hartford's Real Art Ways.  The last time we worked together was at La Paloma Sabanera in 2007.  Music needs a place to grow and develop. Here in Hartford Will Wilkins (RAW) and Luis Cotto (La Paloma) welcomed us,  consistently supporting the creative work in a wonderful community-centered manner.  There's no place like home!

In early January of this year, after a week's delay due to snow, Joe and I drove down to Metrosonic Studios in Brooklyn.  The weather was cold and raw in a way that is amplified by the concrete and asphalt of the city.  Ever intrepid, Steve rode his bicycle to work.  Warren arrived with his assistant, and we set up camp in a small room equipped with a bevy of vintage ribbon microphones.  We recorded all the music in single takes.  After listening to an initial playback, we knew that something special was afoot.

I will leave it to others (and to you, dear listener) to unravel and describe the music that we created.  Buy locally when you purchase the disc.  If you do not have a local record store, I suggest that you to order the disc from Downtown Music Gallery in New York.  DMG is a stalwart supporter of the music, and one of our few remaining record stores (in the classic sense), the type of place that many of us learned (and still do) so much about music and those who create it. 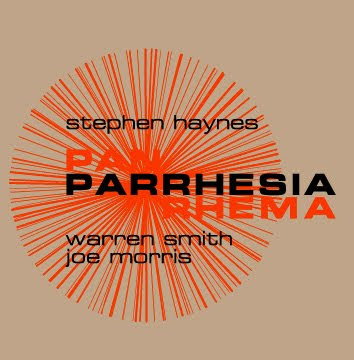