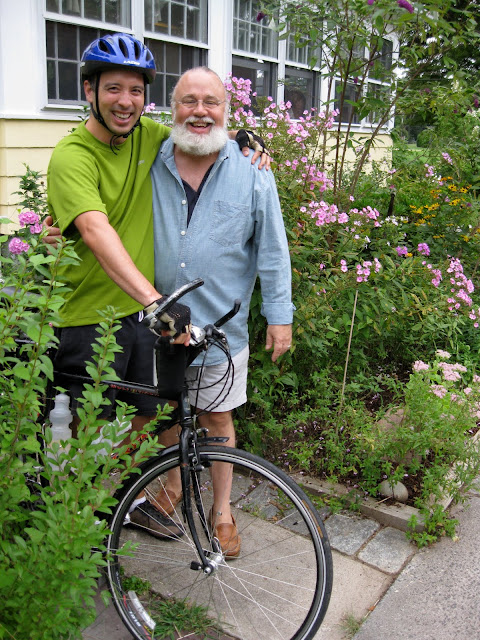 Taylor Ho Bynum rode his bicycle up from New Haven today.  Why the bike and not his lovely fuel efficient automobile?  He is training for an upcoming five-state New England Tour, riding from state to state on his bicycle carrying along his vintage Holton pocket cornet, making stops along the way to perform with friends. Starting in a few weeks time at Firehouse 12 with his exciting new sextet, and ending up at the Magic Triangle series with Anthony Braxton, along the way Taylor will join me and Tyshawn Sorey for an evening of trio music at Real Art Ways on September 12.  What a treat!

I cooked up a meal of gluten-free corn pasta (carb loading seemed appropriate) topped with mushroom tempeh tomato sauce, a garden fresh three tomato salad and black currant spritzers.  It was great to catch up with Taylor as he is always in motion these days and I rarely see him.  After lunch, we headed out to the sun porch to work on notes for Bill Dixon's next recording, a concert document of new music composed especially for the 2010 Festival International de Musique Actuel de Victoriaville.  The music is a companion piece for Tapestries for Small Orchestra and is scheduled for release later this year on the VICTO label. 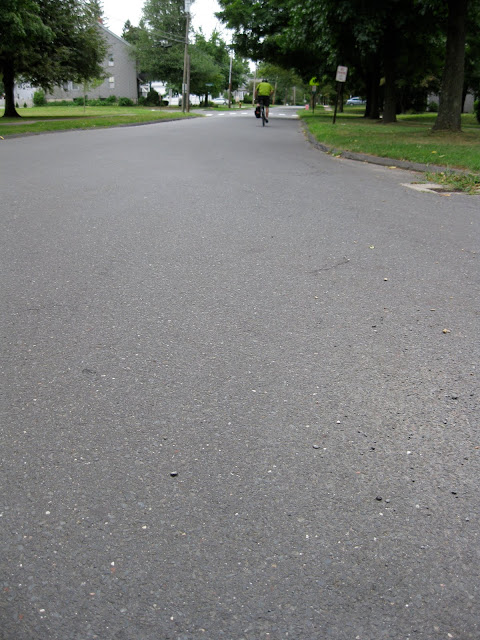 image of Stephen and Taylor by Brigid Kennedy
Posted by Stephen Haynes at 12:58 AM No comments:

In Search of a Sound: Remembering Bill Dixon 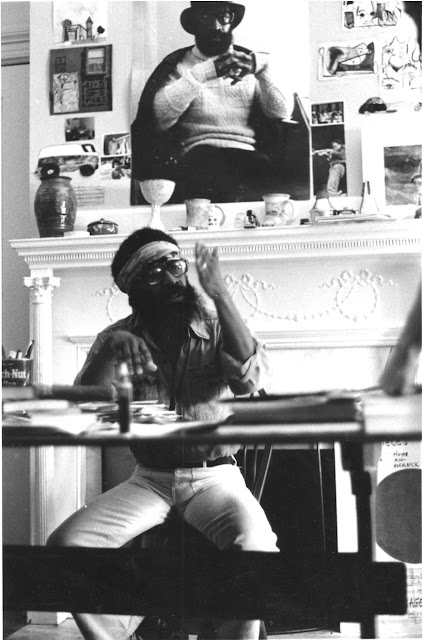 Shortly after Bill Dixon's death, I received a note from the American Music Center's New Music Box, asking that I write a remembrance of Bill and his work. They have a lovely tradition of not printing obituaries but, rather, creating remembrances drawn from a colleague.  I have taken the liberty of re-posting my thoughts here.
I may always be identified (and I am in my mid-fifties) as a student of Bill Dixon.  Fair enough.  One did not spend any significant time with Bill without receiving some sort of instruction: shared stories, advice, or a lesson.  Bill embraced teaching, as he did so many other things in life, fully and with great passion.  He never stopped working either.  As my friend and musical colleague Taylor Ho Bynum put it last week, "Let me continue to play the trumpet until I am eighty-four years old, perform my final concert and make a new record three weeks before I die."
Bill had a wonderful, brusque way of drawing you into his creative orbit.  I still remember my first trumpet lesson with him.  I had hitchhiked up to Bennington College in 1975 and was hanging out making music and chasing co-eds.  Bill called me up to his studio (how did he know where I was?) for a lesson - "Bring your horn!"  He soon had me leaning my abdomen into his fist to illustrate proper use of the diaphragm, all the while speaking to me in an excited voice, urging me onward.  The last lesson we had together was just a few months ago.  I had driven Bill to a performance in Philadelphia, the first and last time he ever worked there.  After the long drive home, Bill Said, "Get your horn out!"  He proceeded to show me what he was working on, using incredible control to articulate small elements of sound, stuff that other players would cast away, to develop yet another strand of language on the trumpet.  There has been a lot of talk about "extended technique" in some quarters of late. Let's note here that Dixon was the next technical extension of the trumpet after Dizzy Gillespie.  His controlled use of multiphonics limned new territories for trumpet that a legion of younger artists are just beginning to connect with.  Not to mention his singular sound and attack on the instrument.  All of this was firmly rooted in "the tradition," and you could often hear Bill speak about little known players like Tony Fruscella alongside the more obvious referents like Miles Davis.
Dixon's influence extends beyond the trumpet into notation/ composition, labor organization and pedagogy, not to mention his career as a visual artist.  (His work is in the permanent collection of the Bibliothèque nationale de France at the Louvre.)  His interests were far ranging, and Bill is an archetype for the artist as a multi-dimensional creative spirit.
I recently asked Bill what the difference was in his approach to notation between the recording of Intents and Purposes in 1963 and the work for orchestra that he was now engaged in.  He had through-composed most of the work on that album (I know - I have seen the scores and parts).  "That was the only way that I knew, at the time, to ensure that I could get what I wanted from the musicians, " he explained.  "If I knew then what I know now, I would have written a lot less." During the residency at Firehouse 12 in 2008 that resulted in his Tapestries for Small Orchestra, there was considerably less paper. Bill spent hours verbally jarring the sensibility/awareness of the musicians, working relentlessly to get everyone "in the room" and present for the music.  He dictated and modeled parts and ways of playing them.  He did not want you to play like you played with everyone else, to traffic in cliché, to employ well-worn and comfortable solutions to musical problems.  Dixon embodied Whitney Balliett's definition of the music as 'the sound of surprise.'
During the drive up to Victoriaville for the FIMAV concert in late May, Bill once again spoke of his longtime dream, "You buy a big building, fill it with musicians and artists, and produce your own concerts and shows.  That's the best you can hope for." Bill never lost sight of his goals for sustained independence as an artist.  He crafted and carried the design for a nascent Black Music Institute for years.  Taliesen (the idea) and the work/teaching of Frank Lloyd Wright was one model for this notion.  A new generation of young scholars is now beginning to turn its attention to Bill and the Jazz Composers Guild.  Will they get it right as they assess the history wrapped up in that story?  Early indications show a revisionist bent.  The essential message of artistic independence set in a collegial modality is still right on time.
Dixon was also notable for telling the truth about the music, both in terms of the sixties and what did or did not transpire, and in his inclination to reveal the technical and aesthetic foundations of the art.  Understand that the early curve of his work teaching took place before the current phase of institutionalization that the music is in now.  At the time that I met Bill, there were few places, and even fewer individuals, that one could go to to learn about the "new thing" and so-called avant-garde jazz.  And finding a modern teaching artist on the trumpet?  No matter what level of development a student was on, Bill shared deep and significant information and methodology at all times openly.  This is still a rarity today.  He believed in teaching as a high art.
-June 21, 2010 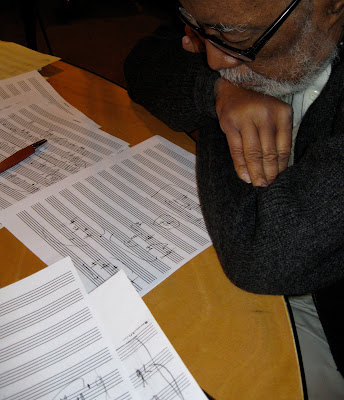 image of early 1970s Dixon in his studio at Bennington College, photograher unknown
image of Bill in rehearsal at FIMAV 2010 by Stephen Haynes
Posted by Stephen Haynes at 11:35 AM No comments: 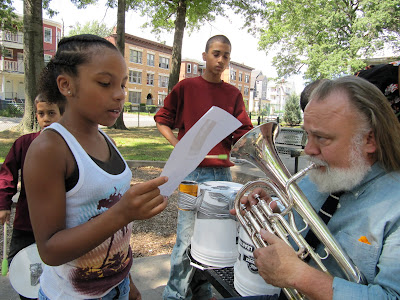 I will leave the work of assessing Ms. Lincoln's ouevre and impact to others.  It is worth noting that Abbey was an essential link in a singular strand in the music: Billie Holiday - Abbey Lincoln - Jeanne Lee.  Do take a moment to reflect on the time period/scene/community that spawned Ms. Lincoln and another recent loss, Bill Dixon, and a host of others who (trans)formed (a distinctive wave in the) music that has nourished many of us, listeners and artists alike. 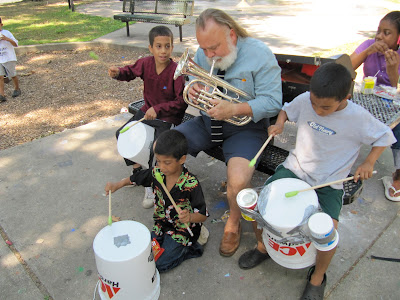