I am excited to share the news that I will join Rob Mazurek's Exploding Star Orchestra for a special performance with Bill Dixon in Philadelphia.  Rob has been trying for some time to fold me into this ongoing project.  This concert will also bring me back to Philadelphia, were I lived and worked in the mid- seventies, for the first time in thirty years. 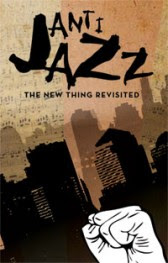 This is a wonderful ensemble that fits Bill's sensibilities like a glove.  We will rehearse and perform on Saturday December 5, as a part of an ongoing concert series at Ars Nova Workshop entitled Anti Jazz: The New Thing Revisited.

Image of Bill Dixon, Rob Mazurek & me by Nick Ruechel 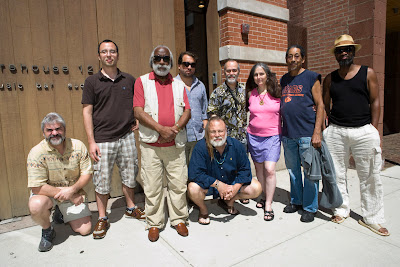 The work that we produced with Bill Dixon at Firehouse 12 has been released.

Those of you that follow this blog may remember the journal I kept here during the recording process.  Response so far has been strong.  Check out the review by Trevor Hunter at AMC's New Music Box.  There is a sample of the music at this link.  I suggest you purchase the product directly from Firehouse 12 Records to maximize artist and label profits.  A tip of the hat to the LEF Foundation, without whose essential support we may not have accomplished this important new work.

The music is a delight: singular and, as Bill would say "not for everyone."  This is music for orchestra, wonderfully drawn and passionately delivered. The DVD opens a lovely little window into Bill's creative processes.  We hope to mount a small tour of the project early in 2010.  Stay tuned for details. 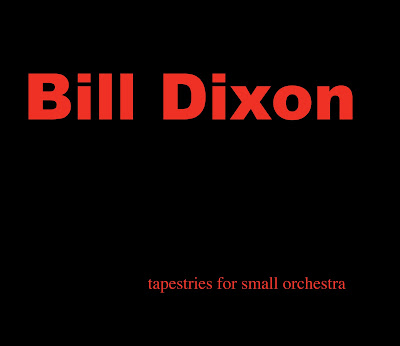 Image of the ensemble by Nick Ruechel

Posted by Stephen Haynes at 3:14 PM No comments: 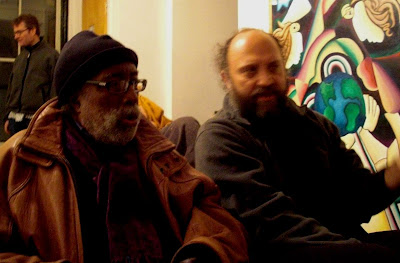 Two graduates of Bennington College's storied Black Music Division invited Bill Dixon to visit Cambridge last week.  Eric Zinman and Stanley Jason Zappa had a notion to put together a small improvising orchestra as a tip of the aesthetic hat to Bill and the Bennington experience.

We gathered in a rehearsal room at MIT on Wednesday for three hours, setting some broad parameters for a musical interaction.  Drummer and former Black Music Fellow Syd Smart was with us throughout, making the hang with Bill and the musicians.  The following evening I ended up conducting both the improvisations, grouped in small sets of players, and some of my own material, scored for the occasion. Check out Chris Rich's wonderful write-up of the project on the Brilliant Corners blog.

Eric is resolved to continue this experience somehow.  Something to watch out for... 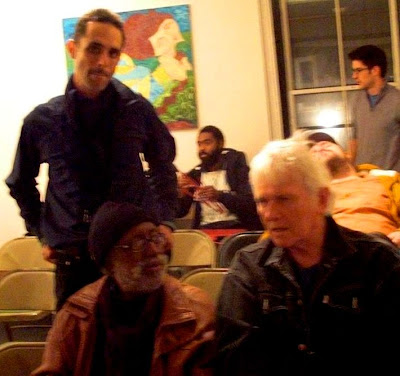 Posted by Stephen Haynes at 7:24 PM No comments: 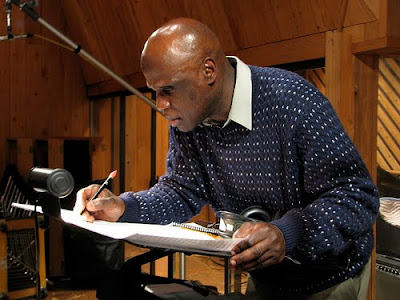 After four Monday rehearsals, we gathered at Legacy Studios, just off Times Square, for two intensive days of recording.  Joseph spent years saving his own money to make this project a reality, and then invited a bunch of his musical friends to join him in the undertaking.  Ballade for a Fallen African Warrior was originally commissioned by MOBI (Musicians of Brooklyn Initiative)  in 1989.  I presented the premier of the commission in a little church down the street from my apartment in Fort Greene.  Joe expanded the work for the recording project. The rest of the material was a suite, The Seven Deadly Sins.

Joe plans a limited edition art release of the music. We also filmed - I introduced Joe to Robert O'Haire, who did the work on the recently completed Bill Dixon Firehouse 12 project. 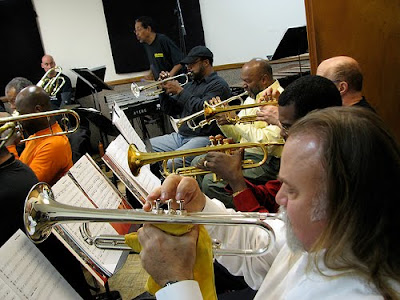