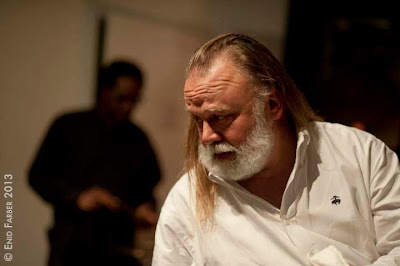 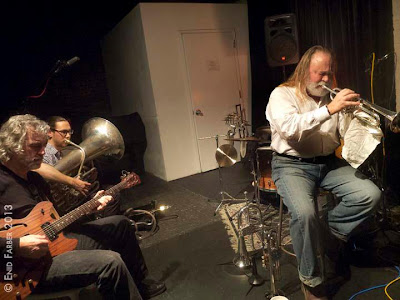 For two weeks during the month of January, Joe Morris curated a remarkable series of concerts at The Stone.  Each of the fourteen night featured two sets of music, and each set featured a different ensemble/grouping of musicians.  Many, but not all, of the concerts included Joe.  Elsewhere, with another musician, this would be an indicator of redundancy, but with Joe Morris we were afforded a rare and sustained window into the remarkable range of his work.  Read more about the series here.

I was invited to join the series for two evenings, each a week apart.  The first concert was a new grouping of Kyoko Kitamura, Joe Morris, Micheal Evans and myself.  The music was a delight.  Listen to/view video of the music here.

The second concert allowed me to continue the work on my Pomegranate project, a dedication to my teacher Bill Dixon.  What had been conceived of as a two-bass quartet had changed since the Hartford premier of the project.  Joe Morris had moved to the guitar and I invited Ben Stapp to join us on tuba.

The weather was quite cold, but we were warmed by the audience.  Great to look out and see so many friends, old and new, wrapped up in the music.  The ensemble shows great promise and there were moments of sustained beauty.  We were graced by the presence/presents of photographer/friend Enid Farber who made the pre-show hang in The Stone's basement and stayed on after Ivo Perelman's set to photograph our work.  Her images, like her vision/sensibility, are special.  Enid is one of the great photographers of/in this music.

In March, this ensemble will open the Spring concert series at Firehouse 12 in New Haven.  The concert will be recorded.  The next day, we plan to spend time in the studio at Firehouse 12 doing more recording.  I plan to draw at least one album of music for commercial release from these recordings. 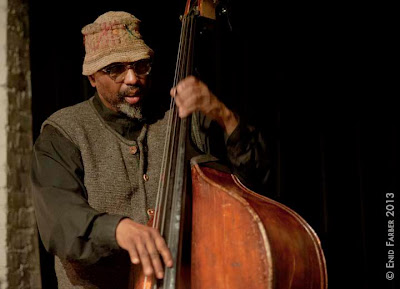 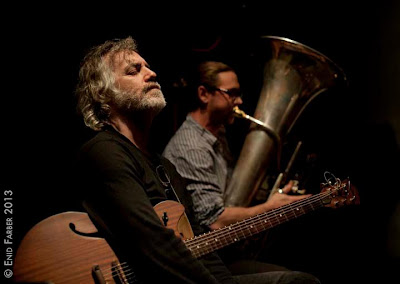 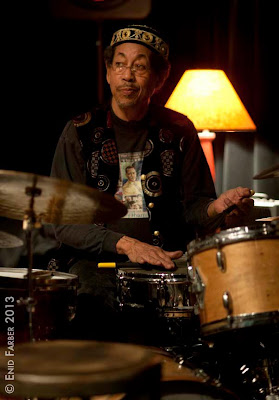 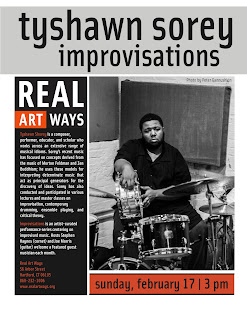 I have been remiss as regards writing about the work Joe Morris and I have been/are engaged in with/at Real Art Ways.  Since I last posted, we have moved into/are mid-way through a second year of presenting.  The list of guest artists since last May is Jason Kao Hwang w/Nathan Bontrager, JD Parran w/Dean Bowman, Mark Dresser, Marco Eneidi, Ramón López, Jean Carla Rodea w/Gerald Cleaver, and Alan Chase.

This afternoon Joe and I will work together with Tyshawn Sorey, who plans to play trombone and melodica along with the expected drums and percussion. The balance of the season will include visits by Pascal Niggenkemper w/Charles Downes and a trio with the wonderful Mat Maneri.  In May, we will launch the first installment of an annual festival of new music at Real Art Ways.  As part of that effort, we hope to convene a small chamber orchestra. 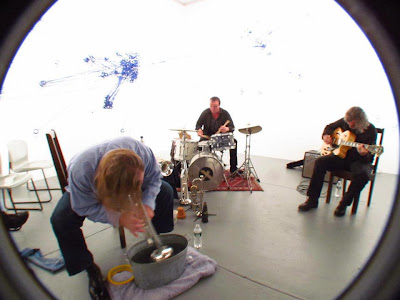 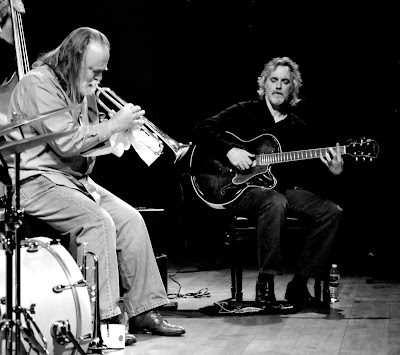 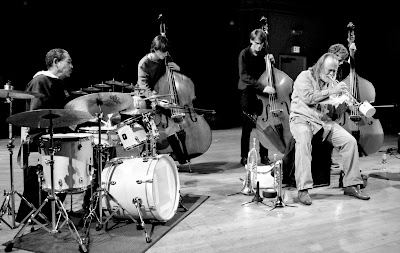 I was recently invited to present new work here in Hartford.  Andres Chaparro curates the Pork Pie Hat Jazz Series for the Marketing, Events and Cultural Affairs (MECA) Division at the City of Hartford.  Andres founded this series long before the creation of MECA and has been a steady advocate for the arts in Hartford.  Andres is a friend and also a wonderful painter.  Check out his work here.

The notion for this ensemble has been in my mind for some time, attached to an invitation to record from a small label.  I wanted to record a two-bass quartet, something I avoided doing while Bill Dixon was alive.  Bill loved the sound of two basses together and used the instrumentation on many of his small group recordings.  I planned to have Joe Morris and William Parker work in tandem on contrabass violin.  William had last-minute scheduling problems, and could not join us for the Hartford premier of this project.  When I called Joe Morris looking for help with covering William's position, Joe ticked off a short list of great bass players in New York and then said,  "But I have these three students at NEC (New England Conservatory, where Joe is a faculty member) who are killing the bass!  I could bring all three of them down to play with us."

This impromptu bass choir consisted of Pat Kuehn, Dorsey Bass and Jesse Heasly and they made a glorious sound together.  Joe moved from bass to guitar, the position he holds in my trio Parrhesia.  We had a delightful time together on and off stage.  During dinner downstairs before the concert, Warren Smith regaled us with stories of his work with Janis Joplin (Gil Evans told Joplin to hire him to write/arrange for her) and his recent activity with the Ebony Hillbillies, a black bluegrass group that he plays washboard with in the NYC subways. 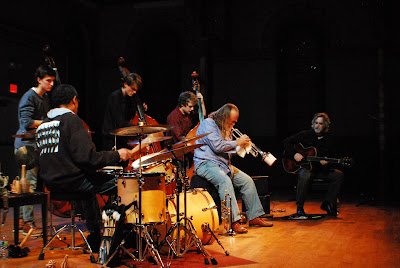 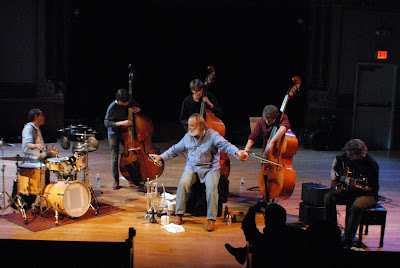 
Posted by Stephen Haynes at 12:17 PM No comments: 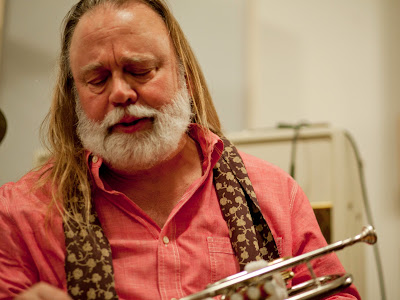 This past December, guitarist Evans Wohlforth (friends from student days at Bennington College with Bill Dixon) called and asked if I would consider sharing an evening with him in the city.  I so rarely bring my music to New York, for a range of reasons.  This call caught me as I was thinking on gently/briefly breaking this rule, so I said yes.  For some time, I had been speaking with Adam Rudolph and JD Parran about playing together in a trio setting.  Fortunately, the timing was good for everyone.

While the evening proved to be less optimal than it might have been, an imprint has been made.  I look forward to returning to/opening this notion and exploring the connections between myself and these two dear friends. 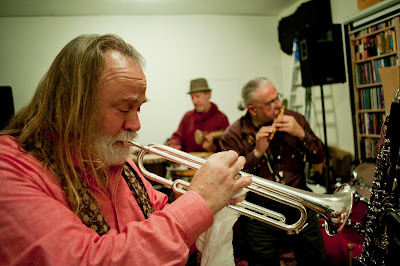 Images of The Tinder Trio by John Rogers
Posted by Stephen Haynes at 10:56 AM No comments: